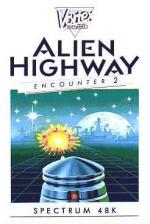 Alien Highway was written 'by popular demand' as a sequel to Highway Encounter and is a souped up, modified version of the original game.

This time your target is the Alien Empire, a vast complex which is essential to the aliens' survival. Once again, you are in control of a droid, or Vorton, but this time there are no lives a single robot is supplied and it has to be recharged from power points along the highway, as contact with the aliens or their weapons saps vital energy.

The ultimate aim of the game is to shove a mightily powerful explosive device The Terratron all the way down the highway to the gates of the Alien HO where it can detonate and rid the world of nasties (until the next game, at least). The Vorton accelerates forwards at great speed but slows down quite slowly if left to its own devices, so some nifty control manipulating is called for to make it behave according to your wishes. As before, the Vorton has to be pointed in the right direction and then moved.

The Aliens have learnt their lesson from Highway Encounter the road to the Empire is littered with obstacles and alien nasties. To add to the fun, the edges of the highway are electrified and burn a clumsy Vorton touching them to a frazzle. Once again, certain objects on the roadway can be moved by firing at them with your lasers and then used to block the path of some aliens, ensuring a safe passage for the Vorton and Terratron.

'Hairy lasers' are still fitted as standard equipment on Vortons, and make suitably short work of aliens. En route, the Terratron must be re-charged seven times so that it's in tip-top condition when it arrives at the Alien Empire: keep an eye out for the Regeneration Stations.

The status area at the bottom of the screen shows how low your energy levels are getting, the time that remains in which to complete the mission and how many of the seven re-generations your Terratron has been given. Without the full complement of regenerations the barrier guarding the alien complex is impassable.

The new highway spans thirty screens, as before, but this time there's a random element which governs the way the game sets up map-makers won't have it all their own way!

'Yeah? This one is very nice; it forms a worthy successor to Highway Encounter. The graphics are excellent, and move beautifully smoothly. Alien Highway is a real pleasure to play; the level of difficulty has been pitched just right to make it frustrating, yet fabulously addictive. I can't really find much fault with it. A tune could have improved it a little, but the spot effects are satisfactory and the playability and addictiveness make up for any aural deficiency'

'Vortex's last release, Highway Encounter, was brilliant. Now the follow-up has arrived and can they keep up the standard? I'm glad to say they can. Although the game looks like its forerunner and is based on the same idea, I like it. Vortex have chucked in a new storyline and a few new sprites to contend with. You still have to advance up the highway, and the game is fun and challenging. Graphically, it is excellent with lots of nice touches like the shrinking aliens. Getting the hang of moving around can be a bit tricky at first, but after a few games you should find it easy enough to control your droid. Some people may say that Alien Highway is a bit too much of a copy of Highway, but as far as I'm concerned the game is ace, and fun to play'

'I was a great fan of Highway Encounter. This is basically the same game as its predecessor although there have been some great improvements made to the gameplay. Graphically there are a lot of similarities, but it's logical to use the same sort of Aliens I suppose. The characters are full of detail and well animated. While the backgrounds are not as varied as I would have liked, they are certainly well drawn. The sound effects are minimal: only the odd beep now and then when you lose a life or zap a nasty. If you liked Highway Encounter then you'll certainly like this - if you haven't seen HE, then I strongly recommend this game. The only problem that I can possibly forsee is that it might be a little easy.'

If you liked Highway Encounter then you'll certainly like this - if you haven't seen it, then I strongly recommend this game.