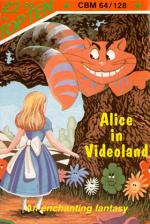 This isn't so much a game as a collection of games. There are four scenes, which are loaded from tape separately. They are linked by the Alice theme, and also by the fact that your score in one scene can affect your chances in another.

You start with a title sequence which shows Alice chasing the White Rabbit. The first scene is Alice falling down the hole, catching keys, bottles and cakes. These have to be used to enable her to pass through doors in the hall. The second scene has Alice catching bread-and-butterflies and rocking-horse flies under the watchful gaze of the Cheshire Cat and the Caterpillar. Then it's on to a giant chess board, and a game of strategy against the Jabberwocky and the Tweedles. Finally, there is a game of croquet, which is quite tricky.

The graphics and sound effects are superb. The games are as good as you could expect, considering that you get four of them for your money. The worst feature is the delays between scenes; if you have a disc drive, it's well worth paying extra for a copy on disc.

The graphics and sound effects are superb... It's well worth paying extra for a copy on disc.