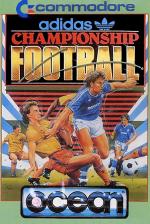 Adidas, those renowned suppliers of replica soccer kits, have lent their name to this. Ocean's latest excursion into the world of championship football. You select one of 24 teams representing the best footballing nations from around the world, and guide them through each successive round, attempting to get to the finals, and become Adidas World Champions.

After selecting a team and watching the draw, you can check match results so far, select the length of the match, and player formation. Click on the boots icon and you move on to the match itself.

The match itself is played from a top-down view (much like Microprose Soccer), and the ref gives his decisions from a window at the bottom of the screen, where shot power, the scores and time are also displayed. Building up power for a shot is a case of holding the fire button down (so the power bar goes up) and running into the ball. Once a match is over, you move back to the options screen for results on the other matches, and so it goes on, until you are either knocked out, or win the Adidas World Championship Trophy.

Flippin' heck! Software companies have gone absolutely bonkers this month with footy games, what with Emlyn Hughes and Kick Off 2 (groan!), and now Adidas Football.

It's a funny old game, as they say, but my one major gripe with this has to be the multi-load which makes getting the game started takes ages. The game itself features some gorgeous graphics (the spinning silver Adidas logos are a nice touch), and sound is pretty good, too, although the sound of the crowd roaring sounds more like a low-flying jet fighter!

The scrolling of the pitch isn't as silky smooth as it could have been, and it's quite difficult to make ouot choice of red and blue for strip colours wasn't a good one. Controlling the ball is difficult, with the ball running away from the player a little too often for my liking.

The referee's a bit harsh with his decisions (I was fouled badly three times in a row, and didn't even get a free kick!).

Overall, a pretty nice footy game with a few niggles that could have been improved upon, but unfortunately not as good as the ageing Microprose Soccer.

A pretty nice footy game with a few niggles that could have been improved upon, but unfortunately not as good as the ageing Microprose Soccer.