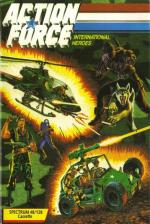 Action Force are sort of bendy toys in balaclavas and you can imagine the sort of gung-ho game that's likely to produce. And you'd be right, more or less.

The idea of the game is to get a jeep fill of boffins from one end of a war-torn, trouble-ridden island to the other so they can decode the computers and stuff the evil enemy. (The plot, you may have noticed, both unoriginal and unappealing, but don't let that worry you.)

Now. You're not driving the jeep. The boffins are doing that. (They can't be that boffinish if they can drive, never saw Uncle Quentin drive so much as a moped, did you?) In fact, you're not even in the jeep at all. You are in the air, because you play the character of Snake's Eyes, and he's a pretty touch sharp shooter so he gets to jet about in a jet pack thingy!!

What happens is this. The jeep needs protection (the cannon having been taken off the back of it in case the boffins shoot themselves in the foot). It's up to you to clear a path across the island for the jeep, dodging the ground to air missiles, shooting the funny yellow things with numbers in them that lurk in the background for no apparent reason other than to get in your way and increase your score. Every now and then you'll come across a little package that contains fuel and ammunition. Useful items to collect, these.

In between picking up bits and bobs and mowing down things, you have to make sure that the jeep is keeping up. It has one or two problems with life.

And since it's strictly a floating jeep, getting it across the water is only possible only by shifting pontoon bridges around the place. You have to fly about dodging rockets, locate a pontoon bridge, pick it up (no easy task that) and then drop it in front of the jeep which will obligingly trundle on to it and wait patiently for the next one. Treat the jeep rather like a backward two-year old and you'll get on famously.

As you carry on through the eight increasingly tricky levels. scrolling your way gently left to right, things get increasingly sticky and that jeep starts to become a real pain in the neck. You're trying to blow up a pylon, and you can't get any further than point X because the jeep is straining at the bit, stuck on some pontoon somewhere. The temptation to push it in the water is indescribable.

Apart from that, Action Force is very good. It's incredibly

hard, and marvellously addictive. It looks wonderful too. The graphics are smooth and clear and there's hardly any trace of attribute clash.

The scenery changes as the levels progress. You start off with towers and burnt out buildings, surrounded by water, and progress to palm trees, deserts and pylons. The things to dodge change too. From big rockets to massive electricity generators, to pylons to rogue electric currents.

The programming was done by the same people who did Rebel for Virgin, and it shows. Rebel looked big, bold and sharp, and so does Action Force. It's one hell of a good game.

Complex, fast moving arcade action that's going to take a long time to master. Great to look at and great to play.

Complex, fast moving arcade action that's going to take a long time to master. Great to look at and great to play.